You are here: Home / Archives for Guyana

This past Sunday morning, Guyanese authorities captured a vessel and several people who were reportedly conducting pirating on the Pomeroon river, a recent hotbed of local piracy. According to the Minister of Public Works, Robeson Benn, a quick, coordinated response by several arms of law enforcement resulted in a crew of fisherman being saved and a crew of pirates being […] 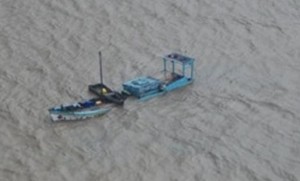 A small fishing boat travelling to help a fishing crew that was attacked by pirates this past weekend capsized on Saturday, leaving 3 out of the 4 crew members unaccounted for. Pirates targeted 15 fishing boats in a 24-hour spree in waters of Guyana’s Pomeroon river on Friday. Reports sent in to the Maritime Administration […]