You are here: Home / Archives for Operations Ocean Shield 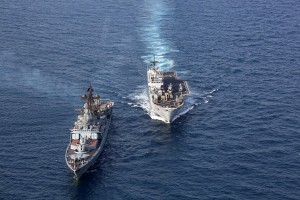 February 2013 A recent bilateral naval exercise was conducted by NATO and Russia, to hone skills and cooperation for potential anti-piracy action. A boarding squad from the ITS San Marco, the flagship of NATO’s Operation Ocean Shield, and the Russian Udaloy-class destroyer, the Severomorsk participated in the exercise. The exercise was conducted in the Gulf of Aden, as part […]