You are here: Home / Archives for Straits of Malacca 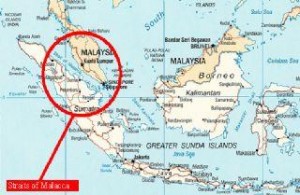 July 2, 2012 Indonesian navy personnel traded fire with three pirates in the Strait of Malacca, injuring two pirates and killing one. The Strait of Malacca is a dangerous area of piracy in the first place, and the time period right before the Idul Fitri holiday often sees a spike in piracy. The incident occurred after the Navy […]