You are here: Home / Archives for Turning the Tide on Somali Piracy 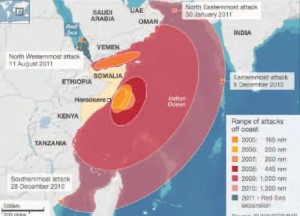 November 2012 According to a senior United States official, Somali pirates have recently expanded their sphere of operation to include the west coast of India. Piracy remains an issue at the forefront of the diplomatic relations between world powers and nations in the Indian Ocean region. There is now a seemingly permanent detachment of naval vessels […]