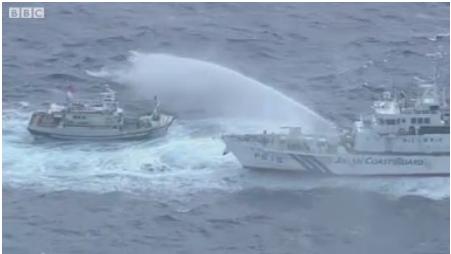 In an escalation of the dispute between Japan and China over the Senkaku Islands, Chinese Vice Foreign Minister Zhang Zhijun warned his Japanese counterpart that China will not tolerate violations of its sovereignty. China, which refers to the islands as the Diaoyu Islands, has officially claimed ownership of them since 1972.

Chinese and Japanese ministers met due to the increased tensions resulting from moves on both sides. Until recently, the Senkaku Islands were privately owned by the Kurihara family of Japan, and only rented to the central government for well over 25 million yen per year. But in September of 2012, the Japanese government formally purchased the island for 2.05 billion yen, inciting anger from China, which saw the move as a unilateral solidification of Japan’s claim of sovereignty.

The move caused an angry nationalist response, and as the talks between the two countries began, a flotilla of Taiwanese ships sailed on Senkaku. Reportedly, coast guard ships were present in the group, although it departed after only a short time. Furthermore, the islands have seen increased visits from Chinese fishing boats and surveillance vessels in response to the purchase.

Although the two countries are meeting for talks, any kind of resolution seems unlikely. According to Japanese Vice-Foreign Minister Chikao Kawai, he is only there to explain Japans reasoning behind recent moves and elaborate on their future plans for the islands. Although he as expressed interest in hearing China’s perspective, there has been no talk of resolution.

Nationalist pressures in both countries have forced the governments into a position where backing down would be seen as a weakness, at a time when incumbent politicians must do everything they can to retain favor of their people, due to domestic political challenges to their power.

In fact, Japan decided to purchase the islands in an attempt to block the purchase by Tokyo Governor Shintaro Ishihara, who planned to buy the islands himself and use them for development. Their status as uninhabited is key to keeping the tensions low; any move to create permanent Japanese settlements could draw a strong response from China.

Although some, like Ishihara, have an eye on developing the islands, their main value lies in their natural resources. Currently, Taiwan claims that fishing rights of the region are more important then national sovereignty issues, though in this case the two are closely tied to each other.

But the potentially more lucrative oil reserves, discovered in 1969, surely drives much of the motivation for control of Senkaku. As countries all over the world are scrambling to snatch up stores of the world’s most sought-after yet non-renewable resource, tensions of Senkaku will only rise as the islands become a major economic prize for whoever can hold them.