You are here: Home / Archives for island dispute 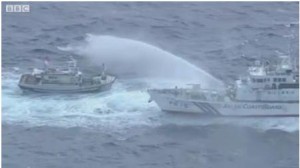 In an escalation of the dispute between Japan and China over the Senkaku Islands, Chinese Vice Foreign Minister Zhang Zhijun warned his Japanese counterpart that China will not tolerate violations of its sovereignty. China, which refers to the islands as the Diaoyu Islands, has officially claimed ownership of them since 1972. Chinese and Japanese ministers met due to the increased tensions resulting from […]