You are here: Home / Archives for ICC 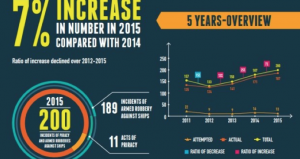 Preliminary reports from the International Chamber of Commerce (ICC), whose Commercial Crime Services division monitors worldwide maritime piracy, indicates reported piracy incidents are more or less holding steady. From the infographic contained in this post we see that attacks against ships have climbed over the past four years. According the ICC, in 2016 reported attacks […]