You are here: Home / Archives for Mercury Chat 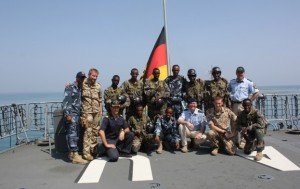 April 2013 German EU Naval Force ship FGS Augsburg recently hosted ten sailors from the Djiboutian Navy aboard their vessel to impart some naval wisdom on them. The German frigate is in the region as a part of the European Union Naval Force’s (EU NAVFOR) Operation Atalanta, aimed at securing the Indian Ocean from Somali pirates. While […]